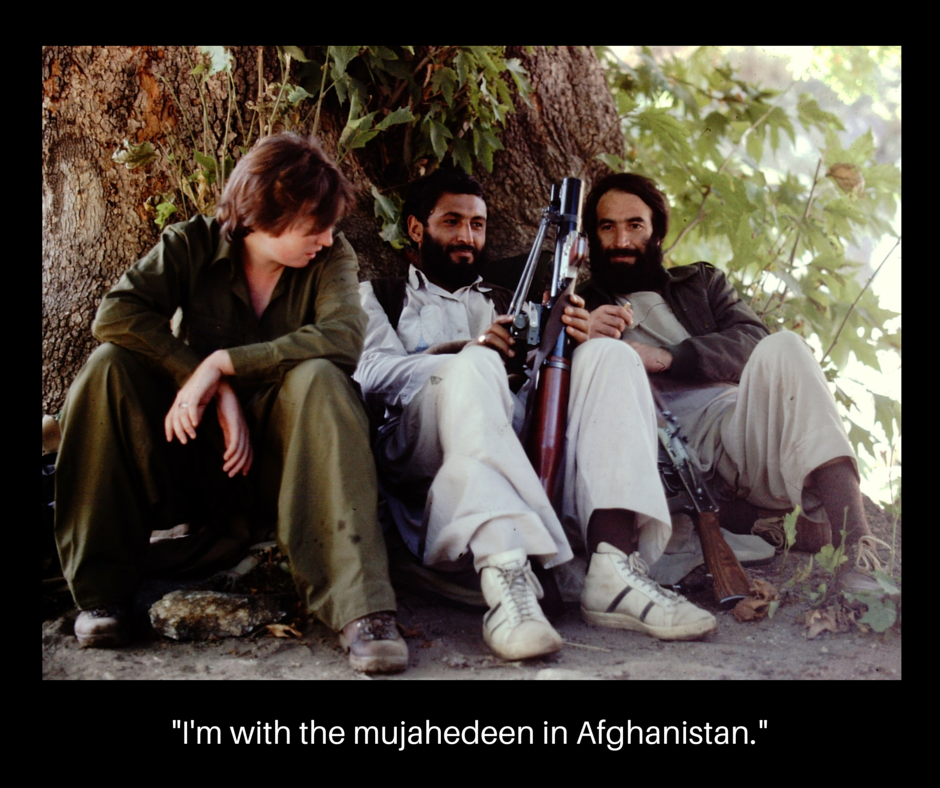 Over the last few weeks, my husband George and I have been getting ready to hit the road for our 16-city book tour to promote my first memoir, My Journey Through War and Peace.

As we’ve been preparing, I’ve spoken to many people about the book—bookstore owners, journalists, even the guy who sold us our RV for the trip!—and they asked me many of the same questions about my experience as a young female journalist in Afghanistan.

So I thought I would share the top five questions I’m often asked and my perspective on each with you today.

The first question I almost always get asked is: “What was it like to be embedded with the mujahedeen?”

Like any relationships that are built during dangerous, uncertain times, I bonded with many of the men that I traveled with on a deep, emotional level. We ate together, traveled together, protected one another, slept beside one another. I met their families.

It was an unconventional dynamic but an experience that I still carry close. I share much more about those relationships—including a very special and passionate one—in the book!

Another common question  is: “Is the threat of sexual assault a deterrent or danger for female war reporters?”

To which I always reply: “Yes, absolutely.” We only need to remember what happened to Lara Logan a few years ago to understand how dangerous it can be to report from a war zone, especially in cultures which have very different opinions about women than we do here in the West.

With that said, thankfully, it did not happen to me. I was embedded with the mujahedeen, a tribal community in Afghanistan. Once you’re invited in, they look after you like their own. So I felt very safe.

This is a little harder to answer. I was there more than 20 years ago and the entire landscape of journalism has changed, so I can’t speak to the experiences that female journalists are having now.

However, in my experience, I was an independent filmmaker at a time when going to a war zone was a way to break into the field (which is probably still true today.) And quite honestly, it’s dangerous work for both men and women.

Being a female in a Muslim country did give me glimpses into the daily life of women in the country, which was forbidden to foreign men and male journalists. The few but meaningful interactions I had with the women really touched me and reminded me how human we all are. We grieve for those we love when they die—especially those killed in war. We want the best for our families, our communities, or at least the basics like food, clean water, safe homes, proper healthcare and education.

I also get asked about the traits I relied upon to survive as a female journalist in a war zone.

I was 21 years old when I went to Afghanistan and had an enormous amount of courage and drive which sustained me. I don’t know that I’d feel as fearless now as I did then.

But what I trusted more than either of those things during my time in Afghanistan was my intuition. As I explain in the book, there were several times when I and many of the men I was traveling with should have been killed. Instead, I got an intuitive bolt from the blue that saved us on numerous occasions.

Finally, many people asked whether I believe the news is as unbiased as media outlets claim it is.

Here’s what I believe: I believe most journalists try hard to remain unbiased. With that said, we humans have feelings, experiences and motivations that shape our thoughts and perceptions and that I believe absolutely leak into our reporting, whether consciously or unconsciously.

Granted, I was young and naive during my war reporting days, but I became friends with the mujahedeen. The Soviets were killing them. And I absolutely had an emotional reaction to that, which I think bled into my reporting while I was in Afghanistan.

I’ll be sharing more about our 16-city tour in the next few weeks. If you’re in a city nearby, I would love to chat more with you about my unique experience—and yours! And if you haven’t pre-ordered My Journey Through War and Peace, you can grab a copy here.