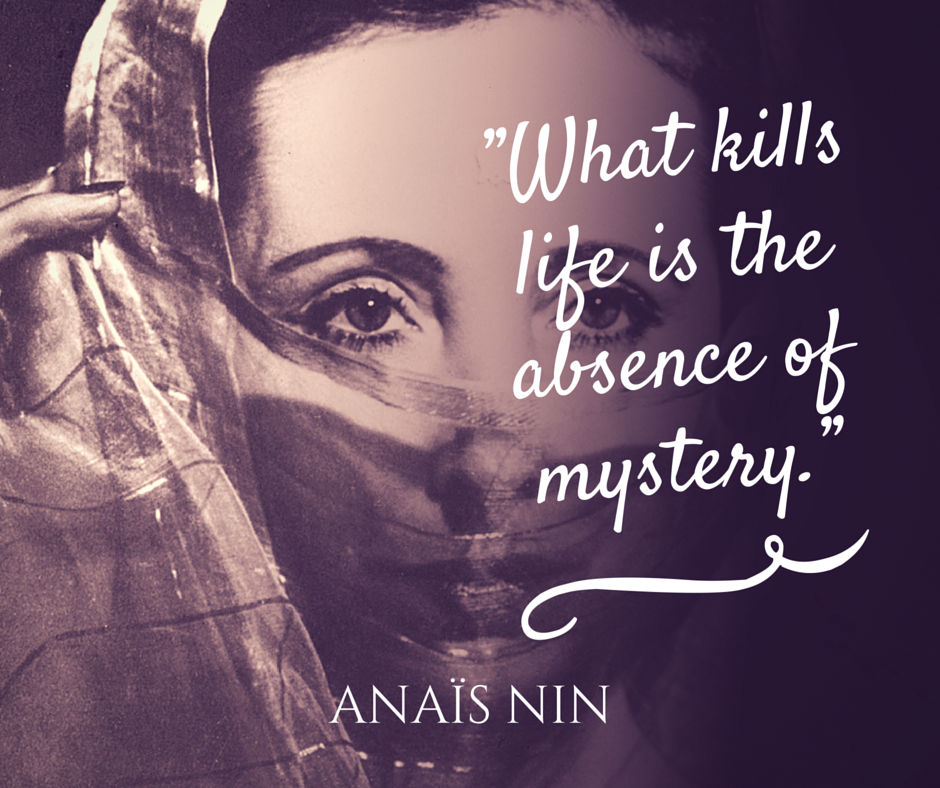 2016, for me, is the year of the heroine’s journey: exploring it (on this blog and elsewhere!), of teaching it (course coming soon!), of honoring my own and celebrating others.

In that spirit, I thought it would be fun to introduce you to a heroine whose own heroine’s journey deeply impacted my life.

Easter break, 1980, I decided to lose my virginity—an idea fueled, in part,by a dead author. On the train from London to the Strait of Dover, I sat clutching The Diary of Anaïs Nin: Vol. 2 (1934-1939). I’d devoured Volume One at the London International Film School. Nin’s personal stories of sensuality and fearless arousal with men and women encouraged me (and, it would turn out, countless other young women) to begin my adventure. I bought a cup of coffee, folded the top corner of the page and decided that I was no longer a virgin. I was now the seductress. I took courage in Nin’s words:

Anaïs would have understood the desire to seduce—yet I wanted something more. Near the train station at Café de Nord, I attracted an older man—a French character-actor lookalike with a big nose. We climbed the stairs in a cheap hotel. He undressed quickly and climbed into the sagging bed. But something stopped me. Was this what I wanted for my first time? No, I decided. I left him confused and leaning against the bed’s headboard under the worn pink bedspread.

“What kills life is the absence of mystery.”

I took the train to Barcelona, where a young, bearded Spanish man who spoke good English gave me a tour of Picasso’s museum, featuring the Blue Period and The Harlequin painting. At the Puerto de Barcelona in a grotto-like-bar, I drank rioja, rich dark red wine, and met a fellow American who wished me a good life. The guide I’d met earlier followed me as I walked along the dark, covered sidewalks, inviting me for coffee, a meal, maybe more. I told him, “No, thank you” in English.

“I wanted to prove that there is infinite space, infinite meaning, infinite dimension.”

I wanted to live my heroine’s life: “authentic, passionate, explosive,” according to her editor. Did that mean sex with anyone I wanted who wanted me, too? I wasn’t sure. Anaïs sought (and got) more from life than most women of her (or, for that matter, anyone’s) times. She dared to call herself an artist, writer, lover, traveler, pursuer of dreams and experiences. Like many who knew her or read her autobiographical accounts, I fell in love.

It was not only her sexual adventuring that compelled me (though, to be fair, that didn’t hurt). It was her utter fearlessness—both in doing and telling. Hers were the days, remember, before you announced to your network, “it’s complicated,” or smacked down “slut shamers.”

While I was growing up in the ‘60s and ‘70s, women had begun to contemplate—as Anaïs had, 50 years earlier—whether they were happy. And whether they might enjoy sex, not as conjugal duty, but for its own sake, and with partners not dictated by marriage. We saw the beginnings of open relationships (now polyamory), exploration, and, yes, a certain amount of naval gazing. Nin could not rightly claim credit, but the women’s movement embraced her along with other forgotten feministic authors.

Nin was big on crossing lines. Never mind Henry and June Miller, the author with whom she carried on, and his attractive wife (Uma Thurman in the movie version), who obsessed her. She was married to two men at once, and sleeping with three. She got it on with her shrinks—though, to be fair, psychotherapy (then analysis, mostly) was in its infancy; ethical guidelines would come later. At about 40, she took a teenaged lover. She pretty much banged anything that moved.

More importantly, she turned the double standard on its head: Could she have behaved the same way as a man? And what if she had? It’s a good bet that a male Anaïs would be regarded now, and then, as a scoundrel; a criminal (“his own parent!”). Instead of a symbol of sexual and artistic freedom, Mr. Nin would be viewed as a randy old bastard—at best.

Anaïs’ diaries—the personal story, journey, myth, metaphors, role model—created the foundation for my decision to live a life based on creativity from a woman’s perspective. And so I have, down to my own little “Henry and June:” I carried on simultaneous affairs (but not ménage a trois) with my now-husband and a female friend. Unlike my literary predecessor, however, I kept no secrets. My partners might not have been happy about the arrangement, but they knew. (Now, unlike in Anais’s day, polyamory enjoys a certain cachet.)

Not always well regarded in her time, Nin is remembered online, on campuses, and in libraries and bookstores, and celebrated in the 1990 film Henry & June. A perfume—and countless baby girls—might have been named for her. While she can’t verifiably be credited with popularizing polyamory, disavowing slut shaming, and flying full tilt toward the sun (Isadora Duncan, Zelda Fitzgerald, Caresse Crosby, Margaret Sanger, and other wayward women assisted in that regard), she did help set innumerable young women like me on the paths to self-discovery and exploration. Following passion, having love affairs, taking risks, and expressing life in beautiful language is all I really wanted from Anaïs. And I got it.

If you want it, too, you can find Vol 1 of her diaries HERE.

Tags: anais nin memoir spiritual memoir
Previous StoryThe Moment I Knew I Had a Memoir to Write & the Great Lady Who Inspired It Next StoryWhat is the Heroine’s Journey?