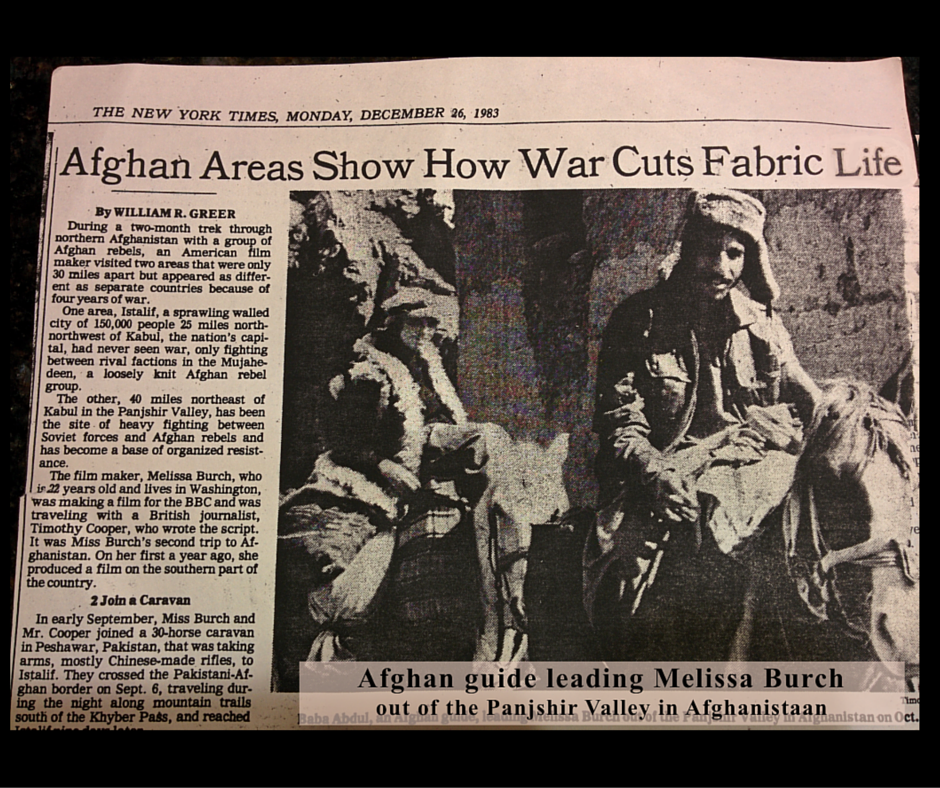 I was 21 years old and lying on the dirt floor while seven bearded 19 -to -20-year-old Afghani Freedom Fighters, my roommates, slept shoulder to shoulder in brown wool blankets beside their antiquated Kalashnikov AK-47 Soviet rifles. We were on the front line in the war against the Soviet invasion, and I was there to film it.

I took a breath and felt my stomach flip, like a reptile swishing its tail. Terror. Today, I would shoot my first war footage for TV. If everything went well, it would be broadcast on CBS for the three-year anniversary of the Soviet invasion. As a camerawoman, I was to act as an unprejudiced observer, follow the mujahedeen into battle, and show the American public the truth about what was happening in the Soviet-Afghan war.

I double-checked that the Bolex was loaded, cranked, and ready to roll, and my other equipment was secure. Commander Muslim was in charge. I was to film what I saw, show the public this footage, and, I hoped, play a small part in history.

Hours later, with the mujahedeen in position and my camera poised, a distinctive whizzing sound ripped from behind me. The warhead I was there to film had been launched. Then an explosion, loud. Through my viewfinder, I watched smoke billowing from a blazing vehicle. Flint particles flew into the window and scratched my arms. Two Russian soldiers jumped from the front seat and dashed away. The burning truck blocked the caravan’s passage.

After four minutes of shooting, winding the camera crank counter-clockwise every 28 seconds, I heard a loud click. The film flapped on the bottom camera spindle, hitting the inside of the box. I grabbed my backpack and ran outside. I’d just managed to replace the film when an explosion pounded the ground. The building I’d been filming in shattered.

We fled, my camera clicking as we did, and were on the run for five days. On the fifth day, we drove to a village near the Kandahar airport and slipped through an open doorway into a makeshift shelter. A plump man wearing a turban whispered for us to enter. His eyes were bloodshot. His face looked younger than his grey beard. These walls, our host told us, were all that remained after bombing killed his wife and son.

While this story, and the many stories I heard just liked it, weighed on me, I was buoyed by the fact that I had succeeded in my quest to show the truth about this war.

This is the question that I’ve asked myself, time and time again, in the years following this memorable experience.

I was there as a neutral journalist. But I also knew the mujahedeen needed me to capture the attack on film because blood-and-guts footage—appealing to Western news agencies—would publicize the Afghan cause. They hoped that the United States, and possibly Pakistan and China, would send military arms.

And after eating, sleeping and living side by side with these men whom I came to forge relationships with and care for, how much of an “unprejudiced observer” could I really be?

At the time, I had not thought to wonder whether the mujahedeen would have attacked that Soviet convoy had I not been there to record it, and how that ambush would ultimately cause more deaths on both sides. Instead, I picked up my camera and shot what I saw: a group of men I cared about, fighting for their lives.

Do I think most journalists truly believe they’re being unbiased in their reporting?

Do I understand they go through hours of training to recognize bias in their reporting and their colleagues’ reporting and have processes in place to keep that bias at bay? Yes.

But do I also believe these journalists have relationships, experiences and emotions that bleed into their reporting, consciously or unconsciously? I do.

Because it did to me.

Tags: heroine's journey memoir spiritual memoir
Previous StoryWhat Are Your Dreams Telling You? An Exercise   Next StoryThe Heroine’s Journey: A Guide to Discovering the Divine Feminine